Native American Facts For Kids was written for young people learning about the Tuscaroras for school or home-schooling reports. We encourage students and teachers to visit our Tuscarora language and culture pages for in-depth information about the tribe, but here are our answers to the questions we are most often asked by children, with Tuscarora pictures and links we believe are suitable for all ages. Photographs are the property of the sources we have credited. 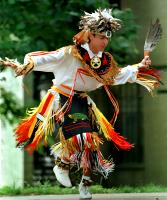 How do you pronounce "Tuscarora"? What does it mean?
Tuscarora is pronounced "tuh-skuh-roar-uh." It comes from their own tribal name, Skarureh, which means "hemp people." Indian hemp, which is also called milkweed, is a plant that produces strong fibers, like cotton does. The Tuscarora used hemp to make rope, cloth for shirts, and ceremonial objects.

Where do the Tuscaroras live?
The Tuscarora Indians originally lived in North Carolina. But in the early 1700's, many Tuscaroras were killed or enslaved by the British during the Tuscarora War. Most of the survivors moved to New York to live with their northern relatives, the powerful Iroquois Confederacy. Most Tuscarora Indians today live in New York state or across the border in Ontario, but there are some Tuscarora people still living in the Carolinas.

Are the Tuscarora Iroquois people?

Today the Tuscarora tribe lives on a reservation in New York. A reservation is special land that belongs to an Indian tribe and is under their control. The Tuscarora Indian tribe has its own government, laws, police, and services, just like a small country. In fact, they still have a traditional tribal council of chiefs who are elected by Tuscarora clan mothers. But the Tuscaroras are also US citizens and must obey American law. Other Tuscarora people live on the Six Nations Reserve in Canada, which they share with members of the other Iroquois nations, or in tribal communities in North and South Carolina.

Today Tuscarora is an endangered language because most children aren't learning it anymore. However, some Tuscarora people are working to keep their language alive.

What was Tuscarora culture like in the past? What is it like now?
Here is the homepage of the Tuscarora tribal school, where you can find information about the Tuscarora people past and present.

How do Tuscarora Indian children live, and what did they do in the past?

What was Tuscarora clothing like? Did they wear feather headdresses and face paint?

What was Tuscarora transportation like in the days before cars? Did they paddle canoes?

What was Tuscarora food like in the days before supermarkets?

What were Tuscarora weapons and tools like in the past?

What other Native Americans did the Tuscarora tribe interact with?
The Tuscaroras were friends and trading partners with the Lumbee tribes, and frequently fought with the Catawba people to the west. In the 18th century, the Tuscarora tribe joined the Iroquois Confederacy. and many Tuscarora people still live with their Iroquoian allies today.

What about Tuscarora religion?
Spirituality and religion were important parts of Tuscarora life, and some people continue to practice traditional beliefs today. It is respectful to avoid imitating religious rituals for school projects since some Tuscarora people care about them deeply. You can read and learn about them, however. You can visit this site to learn more about Iroquois mythology or this site about Native American religion in general.

Can you recommend a good book for me to read?
One book about the Tuscarora tribe for younger readers is The Tuscarora, which includes photographs of traditional and contemporary Tuscarora life. Lacrosse: The National Game of the Iroquois is a lively look at the origins of this traditional sport and Iroquois culture in general, tracing the lives three generations of Onondaga lacrosse players. Legends of the Iroquois is a good collection of traditional Six Nations stories, retold by a Mohawk author. Wampum Belts of the Iroquois is an interesting look at the symbolism and significance of the different wampum belt designs used by the Tuscarora and other Iroquois peoples. Or If You Lived With The Iroquois provides a good look at daily life in the Iroquois tribes in the old days. You can also browse through our reading list of recommended American Indian books in general. Disclaimer: we are an Amazon affiliate and our website earns a commission if you buy a book through one of these links. Most of them can also be found in a public library, though!

How do I cite your website in my bibliography?
You will need to ask your teacher for the format he or she wants you to use. The authors' names are Laura Redish and Orrin Lewis and the title of our site is Native Languages of the Americas. We are a nonprofit educational organization working to preserve and protect Native American languages and culture. You can learn more about our organization here. Our website was first created in 1998 and last updated in 2020.

Thanks for your interest in the Tuscarora Indian people and their language!

Learn More About The Tuscaroras

Tuscarora Indian Tribe
An overview of the Tuscarora people, their language and history.

Tuscarora Culture and History Directory
Related links about the Tuscarora tribe past and present.

Iroquois League
Information and links about the Iroquois Confederacy.

Would you like to help support our organization's work with endangered American Indian languages?